Pregnancy can be a beautiful time, but it can also be a time when you need a good laugh more than ever (and also maybe a strong cocktail, but those are off-limits). Enjoy these funny pregnancy quotes because if you’re incubating a human (or you’ve done so in the past), you’ve earned them.

If your partner is incubating a human, well, then you may need them even more!

{I’ve tried to include attribution for as many funny pregnancy quotes as possible, but many were anonymous and/or found on Pinterest. I did some basic Googling, but this is a Mom Blog, not the New York Times, so…}

Now let’s take a look at these funny pregnancy quotes!

“You don’t realize how many people you and your spouse have despised over the years until you have to name a baby.” (For real though — this was such a struggle for us!)

“People always say that pregnant women have a glow. And I say it’s because you’re sweating to death.” – Jessica Simpson

“When people congratulate me, I like to say, “For what?” and watch them panic.” 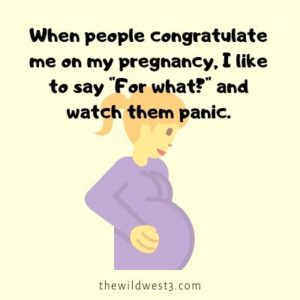 Related: Clever Pregnancy Comebacks for When People Ask If You’re Having Twins, Why You’re So Big, Etc.

“I’ve never even kept a plant alive, but they’re going to let me leave the hospital with a baby? This doesn’t seem right…”

“Warning: Due to the influence of pregnancy hormones, I could burst into tears or kill you in the next five minutes.” -RotteneCards

These quotes remind us: pregnancy is exhausting and pregnancy brain is REAL

“I have two brains in my body, but I’ve never been so dumb!” – Gloria in Modern Family

“Pregnancy. It’s just like a constant hangover.” – Ellie Kemper (As someone who’s had horrible all-day sickness over several pregnancies, I would say this funny pregnancy quote is also a bit PTSD-invoking)

“Pregnancy is the happiest reason ever for feeling like crap” (and all the pregnant mamas said, “Amen!”)

“Growing a baby makes me feel like a superhero. A really tired, weak superhero who wants to eat all the time and is not allowed to lift heavy objects.”

“Sure, I could try a pregnancy yoga class, but personally, I prefer to do my breathing and stretching solo… lying down… Napping. I’m talking about napping.”

Turns out, there’s a lot of funny pregnancy quotes out there about peeing.

“It’s a great thing about being pregnant, you don’t need excuses to pee or eat” -Angelina Jolie

“Peezing – peeing and sneezing at the same time.” – The Joys of Pregnancy

“Peeing on a stick and preserving that stick is the start of the many disgusting things you will do as a mother.”

“I used to have a terrific flat stomach but now it’s kind of blown out after two giant babies used it as a short-term apartment.” – Amy Poehler

“To pee or not to pee? That is never the question. Pee. Definitely pee.”

There are also a lot of funny pregnancy quotes about eating, which should surprise exactly zero people.

“That moment when all your friends are dieting and exercising and you’re just like, ‘Baby wants a cupcake.'” – someecards.

“When your wife is pregnant, don’t eat the last, ANYTHING.”

“I know my baby is going to be an over achiever. I reached my healthy pregnancy weight gain limit in the first trimester.”

Related: Gaining Too Much Weight While Pregnant: Your Hilarious, Unconventional How-To Guide for Gaining 50 Lbs!

It’s not always funny when pregnancy seems to last forever

“Everybody leave me alone. I’ve had a busy day being pregnant and I have to do it again tomorrow.” – someecards

“Waiting for this baby is like picking up someone from the airport but you don’t know who they are or what time their flight comes in.”

“At night, I go to bed like a fairly normal person, but I wake up stranded, like a turtle upside-down on its shell.”

“The baby hasn’t even come out yet and I am already so resentful towards my husband. Especially when he asks me to do stuff around the house. ‘Hey, can you wash the dishes?’ ‘I am not doing jack s#%t anymore; I’m busy making an eyeball!’” – Ali Wong (Her Baby Cobra special is on Netflix, but here’s a link to this specific clip. Be advised: she uses some strong language).

“Months have an average of 30 days, except the 9th month of pregnancy which has about 1,000 days.”

“When pregnancy feels long and endless, I like to think on the bright side: no periods!”

And let’s not forget all the awkward comments from other people.

“When people ask me idiotic things like, ‘You know what causes that, right?’ I like to respond with “No, please explain it to me.”

“If someone asks me if I’m due any day now, even if I am, I always lie. I could be 42 weeks pregnant, but I’ll still say, ‘Nope, still got three more months to go!’ just to see their horrified faces.”

“Pregnant women should come with a warning light–like the ‘check engine’ on a vehicle. When they’ve endured one too many stupid comments from strangers it should turn on. When they’ve hit their absolute limit with those comments, it should flash and beep.”

Pregnancy isn’t always fun, but it can (almost) always be funny.

I know it’s hard to laugh with the hormones, weight gain, and nausea–plus, laughing too hard might make you pee your pants (again), but try not to lose your sense of humor or those nine months will seem even longer.

What are your favorite funny pregnancy quotes? If it’s one I missed, drop it in the comments section. 🙂

Related: To the Mom of All Boys or All Girls – On Having a Baby of the Same Sex — Again!

Related: What To Do When Your Water Breaks – Tips from a Mom Who Did It All Hilariously Wrong 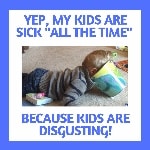